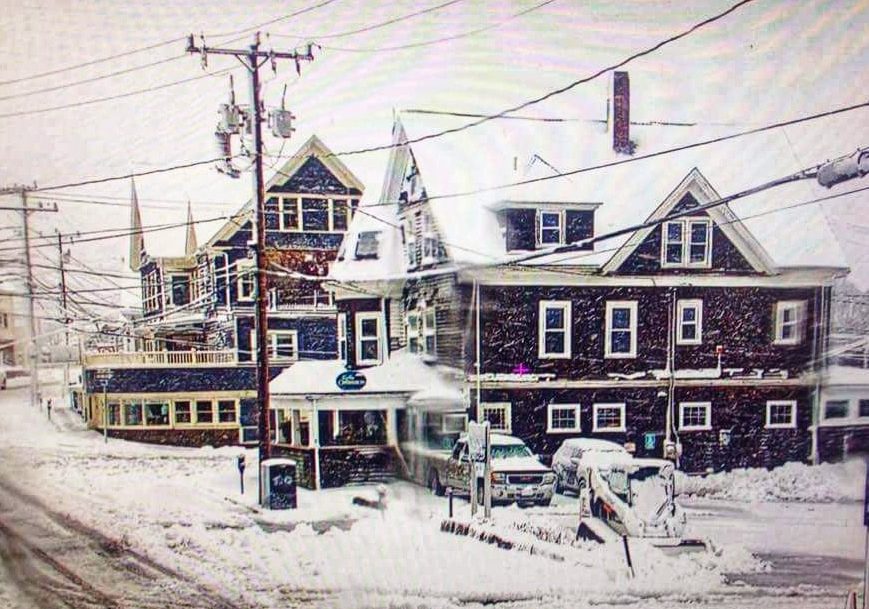 March is supposed to come in like a lion and out like a lamb, but here in Woods Hole, the month has proved to be consistently ferocious! This season, we’ve earned some serious storm cred, having weathered three Nor’Easters in less than two weeks, with a potential “Four’Easter” heading our way. While we appreciate the extra effort by the weather folks for coming up with a catchy name, this is getting a little out of hand. In the late evening hours of Monday, March 12, Winter Storm Skylar decided to join the party that began recently with Riley and Quinn. Local resident David Canty, who tends the Eel Pond drawbridge, captured the above scene of Woods Hole Inn and Coffee Obsession from the vantage point of the bridge’s video screen on Tuesday morning. By 10 AM, the picturesque scene of swirling snowflakes had shifted into whiteout conditions with increasing intensity. 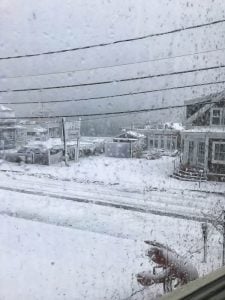 Due to our coastal location, the heavy snow and unyielding winds resulted in countless downed trees, knocking out power to Woods Hole village and all over town. More than 16,000 Falmouth residents were left in the dark, equaling more than 60% of the population, forcing us to once again shift into hardy New England mode and get out the camp stoves and head lamps. Meanwhile locations such as Falmouth High School and Waquoit Congregational Church opened their doors to serve as warming stations, which also provided a place to charge up cell phones and other devices. 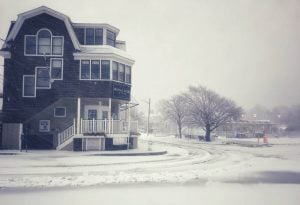 With peak gusts at more than 80 MPH, Mother Nature forced the Steamship Authority to suspend ferry service and also halted work on the debris removal of the former terminal, which was recently demolished to make way for a shoreside restoration project. With school out of session and calls to stay off the roads, Falmouth’s Department of Public Works and local contractors took to the streets to begin the thankless job of snow and tree removal. 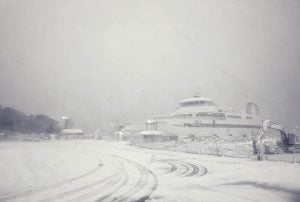 Crews from Eversource and other power companies called in reinforcements from as far away as Arizona to work around the clock all over New England. For the third time in as many weeks! We greeted those glowing yellow trucks from New Hampshire Power like returning champions from an unseen war. 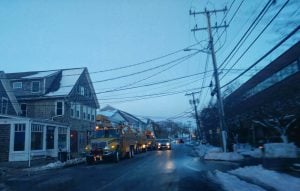 By Thursday, their tireless efforts resulted in power restoration for Woods Hole and the majority greater of Falmouth, and with the flick of a switch, life was back to normal with the sun shining over icy footsteps. 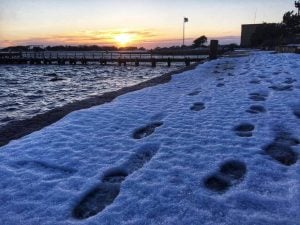 It’s the darkness of winter, especially her storms, that makes spring so sweet. At the end of each season, we are gasping for breath with the beauty of life at the edge of the sea. Join us this spring and summer at Treehouse Lodge, the best new place to stay in Falmouth. Booking online is easy, or call us at 508-548-1986.